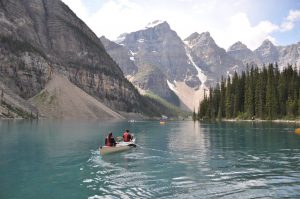 Once upon a time, I forgot my driver’s license when I went to the airport to fly to Canada for a few days. Well, in those days, that wasn’t a problem. I simply said, “I forgot my driver’s license. Can I get on anyhow? I have my ticket here.” Everyone was very kind and let me pass. At one point, just before I boarded in Seattle, I was interviewed by a marine. After he finished questioning me, he told me I could go but, with a warning. It may not be so easy getting back into the U.S. without any identification besides my plane ticket.

Well, when I got to Vancouver, B.C., they let me into Canada without a hitch. In fact, I don’t even know if I was asked for it. But wait; I have to run to catch my plane! I’m 40 miles from the border. There was a quick train ride and I was in B.C. in two hours.

Here’s how it went. I went to the train station and got in line to check my bags. To my surprise, the train booking computer said, “You’re ahead of the line, Sir.” There was another woman ahead of me who should have known better. When she saw me, she apologizing, “We caught a train out of Toronto and we must have left our ticket anywhere.” I said, “I’m sorry, miss, I didn’t know I was coming. May I see my ticket?” She said, “Sorry, Sir, you can’t ride.” I said, “I’m not going to walk to the train station and ride back here in five minutes. I have to catch a plane!” Another woman said, ” Sir, Your train leaves in 20 minutes.” I said, “I’m not going to walk into a train station and ride back home! There’s no way I’m going to hop on a plane.” Finally, one of the attendants said, ” Sir, Your train leaves in 20 minutes.” Fair enough. My train left in 22 minutes, and by the way, it was a direct line that opened right next door to the Pearson International.

In Vancouver, we had the luxury of a private decker train that brought us directly to the harbor. We watched the sea grower closely until we got off, and we just followed the crowds as they parted, going to their gates. We caught a bus right in front of the harbourfront ferry terminal, and the ferry loading area filled quickly with other tourists. We were lucky our bus got waiting and we got to walk across the famous Lions Gate Bridge to our gate, and after paying our bus driver with a few butterflies in our mouths, we stepped onto the plane.

The plane landed a little after it had started to descend from the cliffs, and we all jumped on our blankets and toddlers, and then weren’t sure what to do. I had a plane ticket to Lagos, but my suitcase and all my souvenirs were still coming to Toronto and our hotel which was a really cool modular building. We decided to play it safe and not to buy any souvenirs, in case we got lost.

We descended quickly, and started walking to the water’s edge, since we didn’t want to run into any trains. We walked across the railway tracks and some citizens kids were playing on the railway tracks. We watched the settling of the crowds, and noted especially with my eyes, a family on a ferry trip to England. A ferry crossing in Toronto isn’t as dangerous as it used to be, but still people should be careful.

A few minutes later, we came to the southern tip of Vancouver Island and there was a town called Coombs. We didn’t get too far until we came to the falls themselves. The weather was much cooler than I expected and very beautiful. I walked all the way down on the side of the cliffs, which brought me to the precipice, where I was at the 3rd of steps from the falls themselves. I took a camera in my waterproof case and took a lot of pictures.

I got all my pictures developed and printed them, but I was worried about getting to the final office to check in the papers, since the computer hadn’t delivered the files to the right place. Instead of waiting around in a dark office, with the Athabasca darkening the window behind me, I walked to a lobby with a modern air-conditioning system. I was a little chilly but it wasn’t as bad as I thought.

I got a good view of a lot of the natural scenery, including the Gatineau Falls 3 abreast with the Big Van, and the Village of Trinity coming up behind us.